The underlying instigation in all my art is drawing such as the quality and expressiveness and intention of the line; 'No Day Without Line'. Then the physicality of interacting colour and design, then really “working” the materials as they are; either the stitch, paint, pen or pencil on paper, sewn paper, collage and combinations.

Once, I embroidered instead of painted a breakfast party I dreamed up for a mid-November morning during the first snow of the year. It is an exceptionally colourful embroidery filled with life and light and the joy I felt at being able to fully explore this skill of the hand as recorder of impressions of a desire only. The party never came to pass but the embroidery did. It was the first idea for me of stitch as paint. It was done in the late1970’s while I was studying at U of T.

And I have always painted. It’s my intention here with this revised web site to include paintings, drawings, as well as my embroideries as I hope it will give a sense of my whole working method. I will include many sketches for things as the sketches are the essence of my art. They are most often just themselves; insisting on no other reason for being. They are recorders of my experience here as a visual explorer of people, space and light.

I have been an exhibiting painter and drawer for years. I worked in paper and stitched paper and in the mid 1990’s discovered free-motion embroidery or drawing on the sewing machine. On the sewing machine I worked in techniques of traditional oil painting and “layer by layer” drawing in which I started with the darkest darks and build up to the lights to evolve a depth of surface and volume.
You can see this technique in works such as Found Objects From Dreams.

This painting below Red Dress or Mother’s Dress (it was the model’s mother’s dress to distinguish it from the whole body of my work on my mother’s skirts) is a developed sketch in acrylics on paper. The embroidery above is drawn directly from the model on the sewing machine. Both images are the same model who I worked with for years.

I began my art life greatly inspired and 'awakened' by the colours, graphic story telling, scale and precise and descriptive hand work of the Bayeux Tapestry. I have always kept that rich and moving source in my mind and heart: Bayeux Tapestry: coronation of Harold . The very act of it influenced the very act of art making for me. 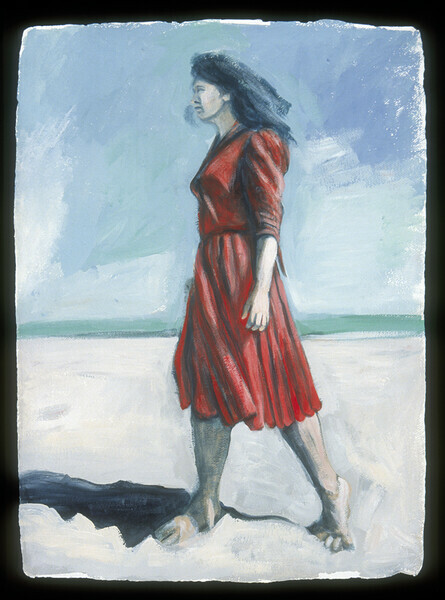 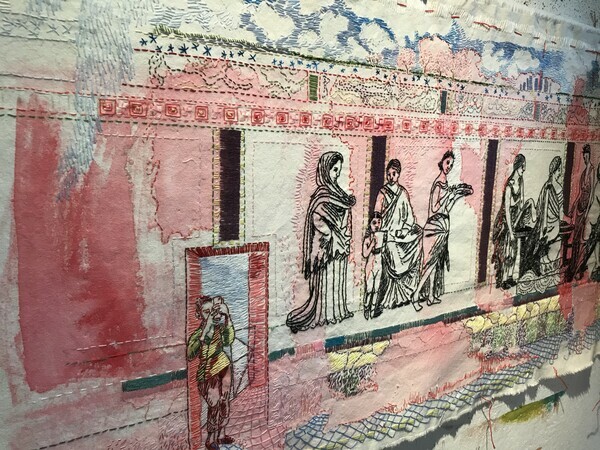 Opening Scene: Where Are We?, hand embroidery based on the Villa of the Mysteries, Pompeii, 2020- inspired by the Bayeux Tapestry